Today we had to go all the way to Kent and back to visit someone in hospital. We broke the journey at Wisley, as usual, and I had a few minutes to pop up to the Model Vegetable Garden to have a quick look at what is going on there this year.
What a disappointment!
Last year they had started from scratch with this beautiful little veg/fruit garden, with stepover apples dividing the beds up into interesting areas planted with a mammoth amount of veg. The three following photos show how it looked in the summer. It was a real delight! 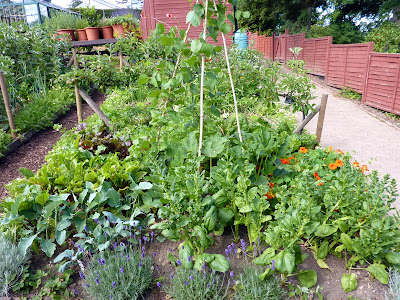 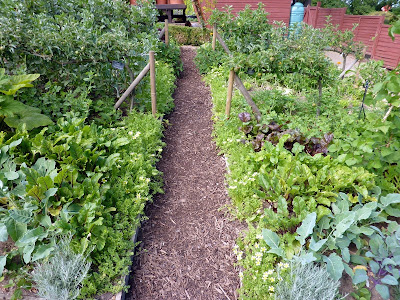 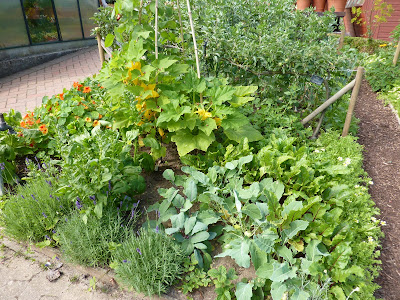 So today I thought I would just see how it looked over the winter. I was shocked to find it had all gone (even the wonderful stepover fruit bushes only planted in the beds last year)! They now have it as a boring rhubarb trial bed! Wasn't even worth a photo.......

Today it was warmer than of late and my back was not too bad so I decided to make a start on the beds ready for this year. I love the concept of Square Foot Gardening, and have been doing just two beds by this method for a year or two, but have decided to go for it with all the beds this year. There are just two of us most of the time, so small quantities are required of lots of different veg, so the Sq Ft method will work for us.
This bed is marked out into 1ft squares with some bamboo poles that I now don't use as I have the arches. 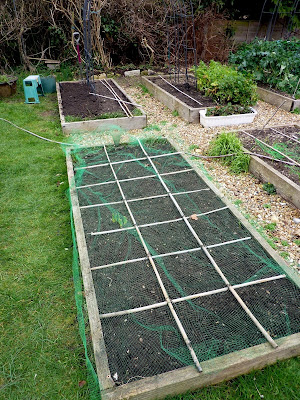 I gave it another dig over and removed the cat droppings, then covered it in net to stop further infestation!
In the back of the picture is the bed that was the strawberry bed last year. I will convert that to Sq Ft tomorrow. I have dug out all the strawberries...they didn't do so well last year, so perhaps they are getting to the less productive stage of their lives. I saved the baby plants and planted them under the back hedge. The spot where I put them was full of ivy, stems and roots. These I threw into the dip at the back of the hedge to provide insect home type opportunities. The soil was soft and looked to be in good heart but I added a load of chicken manure pellets to make sure.
I have made other provisions for strawberries in grow-bags as explained last week, but these here will make a welcome addition. The plants should thrive in this sunny spot (south facing, with protection from the north) and the stones should help keep the roots moist. 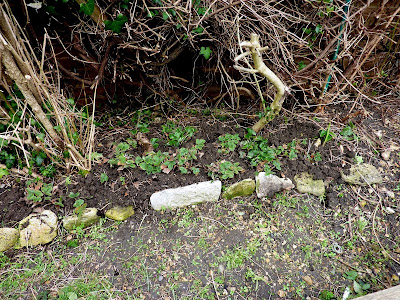 I moved the rhubarb forcer over one of the crowns a couple of weeks ago. Couldn't resist a peep. The plant seems to be growing faster than the uncovered crown next to it (see last photo)....so we should have some early pink rhubarb. What a treat! 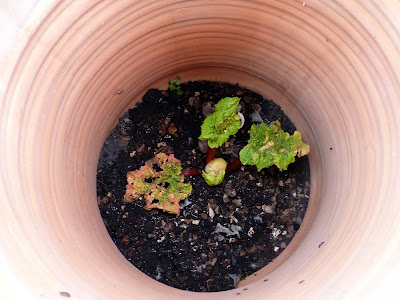 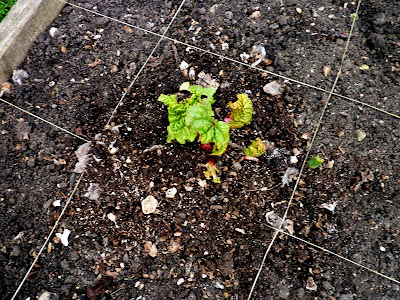 This is the other crown....the manure I helped it with last Autumn is nearly gone. I didn't pull any stems from these last year as they were new then, so I will be glad to have some stems this year; having given up the allotment with its huge bed of Timperley Early...

I sowed these two days ago and they are up already! The packet of seeds was dated 2007/8, to be used by 12/2010. This gives me confidence to try other out of date packets. The germination is still good. 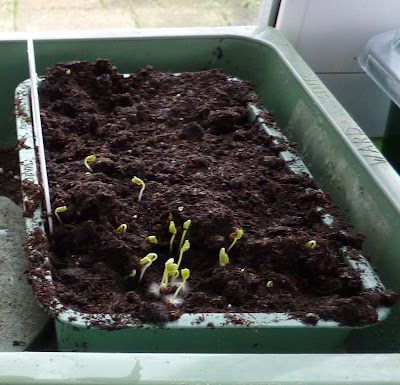 The google definition of this plant is....."broccoli raab = broccolirab = broccoli de rape = broccoli de rabe = brocoletti di rape = brocoletto = rappi = rape = raab = rapini = cima di rapa = cima di rabe = choy sum = Chinese flowering cabbage Notes: This slightly bitter cooking green has long been popular in Italy and is now catching on in America. It's best to just eat the florets and leaves; the stems are quite bitter. Substitutes: Chinese broccoli (similar, but not as bitter) OR dandelion greens OR Swiss chard OR mustard greens OR turnip greens OR kale OR broccoli (milder, takes longer to cook) OR cauliflower OR watercress"
Posted by lilymarlene at 11:18 2 comments:

Washed the tunnel and sowed some seeds

A warmer day than of late so I had to make use of it. My back is bad (inflamed lumbosacral joint giving me sciatica!) so I can't do real gardening. But the polytunnel needed its annual wash so I got on with that today. I use my Vileda mop with e-cloth mop end, so that I don't need soap (.... or worse!) I gave it a good scrub inside and out and it looks much better now, and there is a lot more light getting to the inside.

Then I felt the urge to actually grow something....so I got on with some seed sowing. These are what I have started off so far.....
In containers in the tunnel....Carrots.."Early French Frame", "Early Nantes" and some Suttons Baby Carrot Type, "Ideal". These are in large containers on the bench.
In Row Planters........ Very Dwarf Early Pea "Oskar" and
....Misticanza...a 4 salad mix from Franchi
In modules...Beetroot "Chioggia" and Beetroot "Boltardy"
In the propagator on the windowsill indoors....Aubergines "de Barbantine", "Black Beauty" and "Violetta di Firenze". The last two are old seed so I might get nothing from them
Also in the propagator....Herb "Summer Savory".
In small pots to be transplanted later.... Cabbages, "Portuguese", "Offenham Flower of Spring", and "Earliest of All". Also some "Cima di Rapa"
I have set some Broad Bean seeds to soak.

I've had enough now, so I will sit and read my new "Kitchen Garden" magazine...
I used to think that I couldn't actually do any more damage to my back (broke it in 1984) and that I should ignore the pain. But it has been so sore lately that I went to the osteopath. He has given me a good telling-off, and so I must respect that and not do the heavy stuff for a while. It hurts too much anyway!
Posted by lilymarlene at 14:36 5 comments:

lilymarlene
I love vegetable gardening. This new blog will track my attempts to make my whole garden productive; both the kitchen garden and the ornamental areas front and back.